Over the last few years that I have been birding I have known fall as the time of year when there is so much potential for rarities that it can become overwhelming. For example, one might go to a local migrant trap and find a crazy fallout of warblersm but that's not it. There's always the possibility of a wandering frigatebird or jaeger to fly over or an Upland or Buff-breasted Sandpiper to be feeding in the fields surrounding that stand of trees you are scanning. This fall one family of bird has taken the spotlight, shorebirds. Now for those who are unfamiliar with the taxonomy of shorebirds, shorebirds include plovers, stilts, avocets, curlews, and sandpipers. Fortunately I live in between two of the most productive shorebirdsing spots in the county, the Glendale Recharge Ponds and the Gila Bend Area. Between these two areas there are many ponds and fields (which when flooded produce many "shorbs") that can be very productive at times.

In Arizona fall migration for shorebirds starts in late-June/early-July. So having a Western Willet be one of the first shorebird migrants I found in early July was pretty cool! 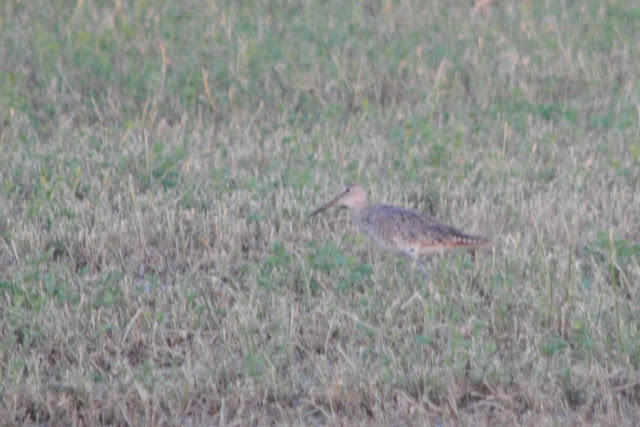 A few days later, in mid-July, I was wandering around my house completing various chores off of "the list" my mom gave me for the day when fellow bird-hard birder Tommy D gave me a call. He excitingly explained that he was on his way to my house to pick me up to see a couple Black Skimmers (a code 5 for the county!) which Duane Morse (founder of Maricopa's one and only record of White-eared Hummingbird) had just found at the Lower River Road Ponds about 20 miles west of my house. Finishing up on the list, Tommy picked me up and we zoomed over to the Lower River Road Ponds. Before even parking the car we spied the skimmers hunting over one of the ponds! 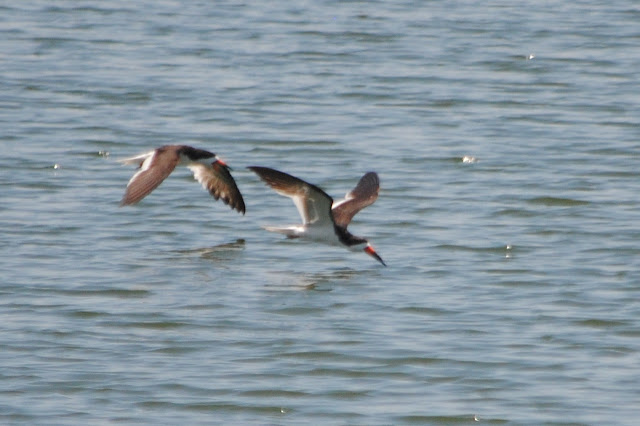 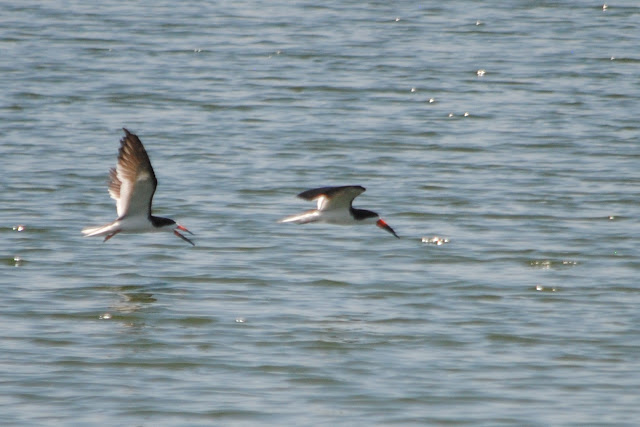 These skimmers were a Maricoper for both Tommy and I, and not one we exactly expected to get this fall! There were also a couple other birders present watching the skimmers, Barb Meding and Melanie Herring. Together, the four of us enjoyed observing these very unique birds. 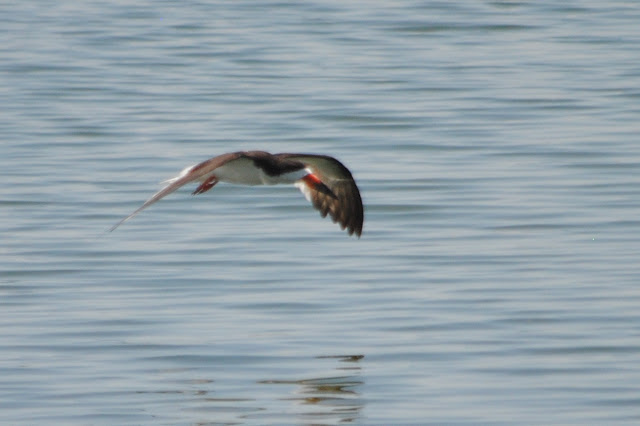 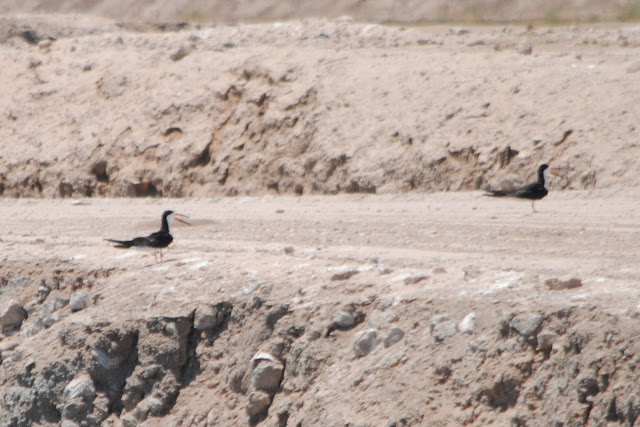 Although I got back to my house fairly early in the day, many other birders got to enjoy Duane's great find! But then something crazy happened, even crazier than the skimmers. Later that evening, while I was chilling at the crib I got a call from Kurt Radamaker and he told me that he had found an alternate plumaged Hudsonian Godwit about a mile away from the Lower River Road Ponds in a dairy slop pond!!! There was one problem, however, it was too late to chase the HudWit that day because the sun had just set and the pond he found it in was about a half hour away. I got in contact with Tommy, yet again, and we made plans to search for the godwit very early in the morning. So for the second time in the last 24 hours, Tommy picked me up from my house and we drove over to the Palo Verde Area. Tommy and I were the first birders to arrive at the slop ponds so we split up and scanned the two ponds from opposite sides. After scanning for less than five minutes I yelled "Tommy, I got the bird!" and boom, we were looking at Maricopa's 3rd ever Hudsonian Godwit! 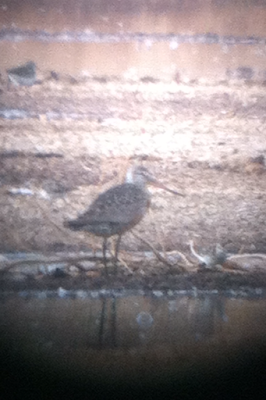 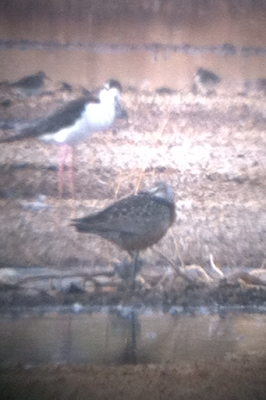 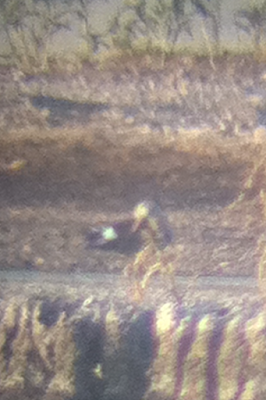 Within five minutes of spotting the HudWit the birders started rolling in and before we knew it there were around 30 birders present watching Kurt's amazing find! Unfortunately the land owners didn't allow birders onto their property (for any possible liability issues) but either way we enjoyed this awesome bird! 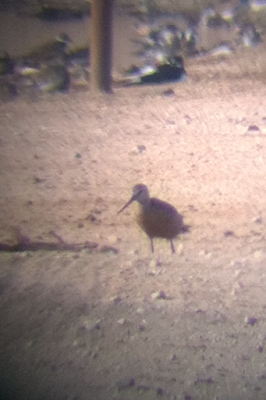 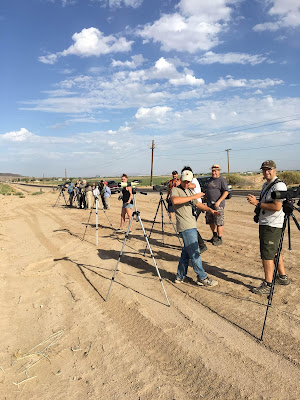 With the HudWit and skimmers being found in the same day I knew there was more out there! Since then I have been scanning most every pond between Buckeye (sometimes Glendale) and Gila Bend in search of rarities about once every-other week, most of the time with success. Now shorebirding can become addicting and I was definitely hooked for the fall! The first of the rare species of shorb for AZ I started finding this fall was the Semipalmated Sandpiper, an overlooked and overeported species in Maricopa County. 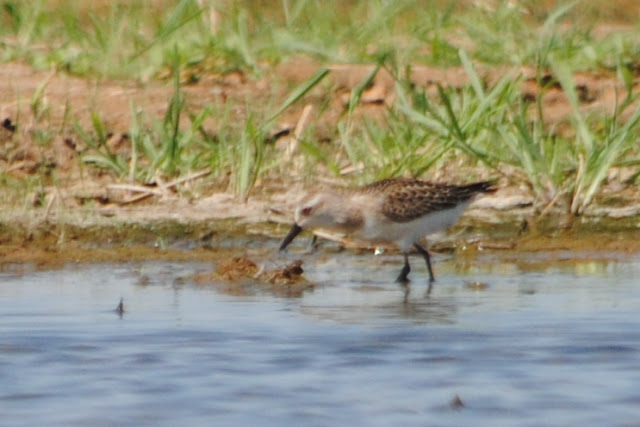 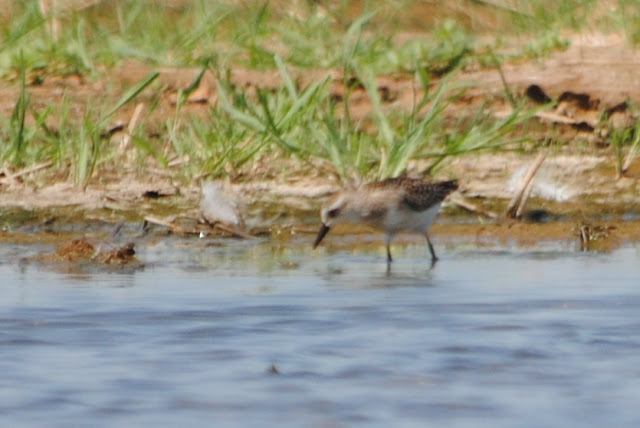 Semipalmated Sandpipers can be distinguished from Western by their short rather stout blunt-tipped bill, darker streaked ariculars, the brown streaked breast band, and unique overall brown scapulars/mantle. They can also be separated from the Least Sandpiper by its light supercillium and throat, more scaley patterned scapulars, broader bill, lightly streaked ariculars and crown, and black legs (not always a good field mark because bad lighting and/or mud can effect the look of the legs). 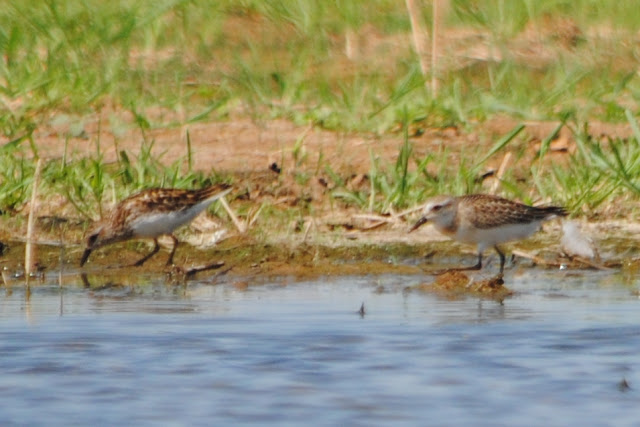 Another shorebird that is rare yet regular in the county in fall which I had found earlier on in fall was an adult Short-billed Dowitcher, my first time seeing an adult in the county. 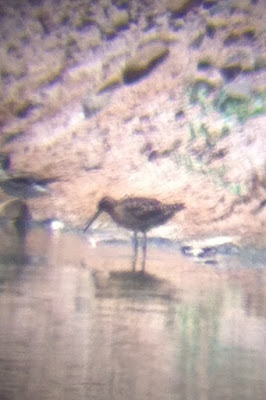 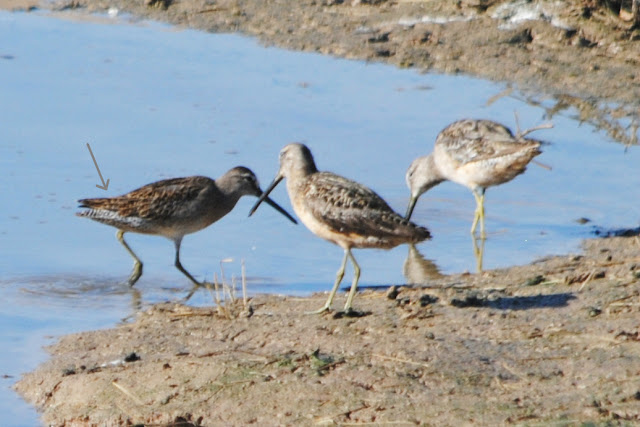 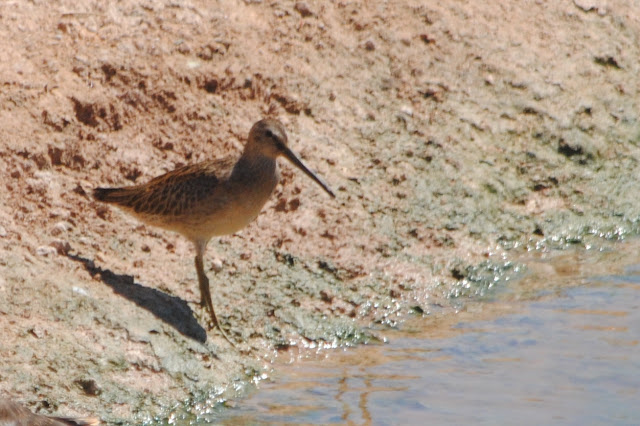 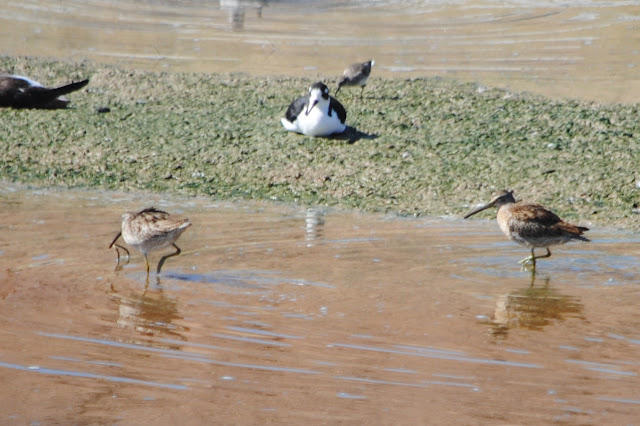 Both dowitchers in the photo above are Short-billed, note the overall plumage color is different in these birds. That is likely due to age.

In adult dowitchers a field mark which is often useful in fall in Arizona is wing-molt. Now adult Long-billed Dowitchers are one of only a few shorebirds which molt their wing feathers in migration. On the other hand Short-billed molts its wing feathers on its wintering grounds. So in fall migration in Arizona any dowitcher which is molting its wing feathers is a Long-billed as where an adult dowitcher in Arizona in fall migration which shows no wing molt is likely a Short-billed. However, wing molt can be hard to see in many cases so this "field-mark" is to be used with caution.

Before I step away from the dowitchers here are a couple of very useful articles on these two strikingly similar species and how to distinguish them apart.

In mid-August while doing one of my casual shorebird runs with fellow birders Joshua Smith, Laura Ellis, and Steve Hosmer I spotted a Ruddy Turnstone!!! 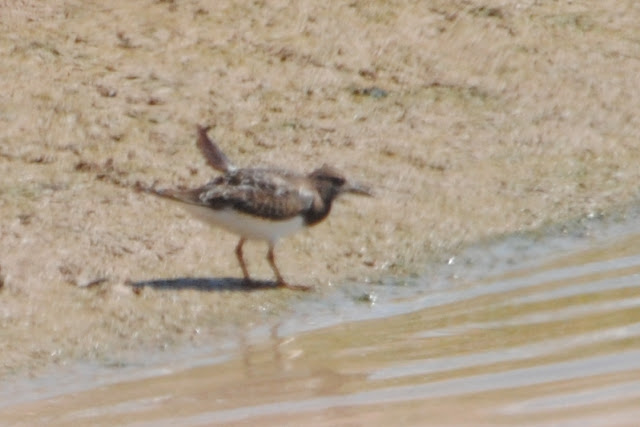 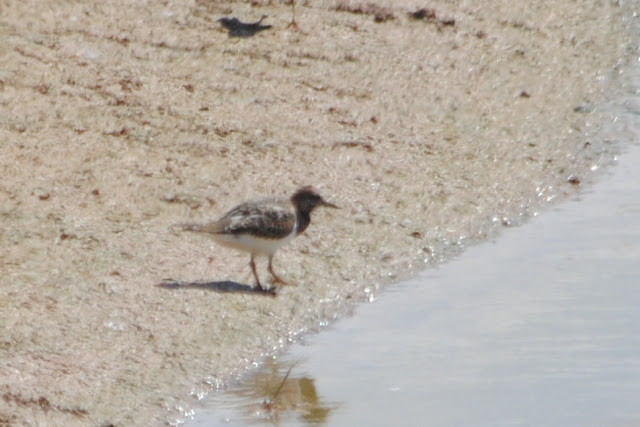 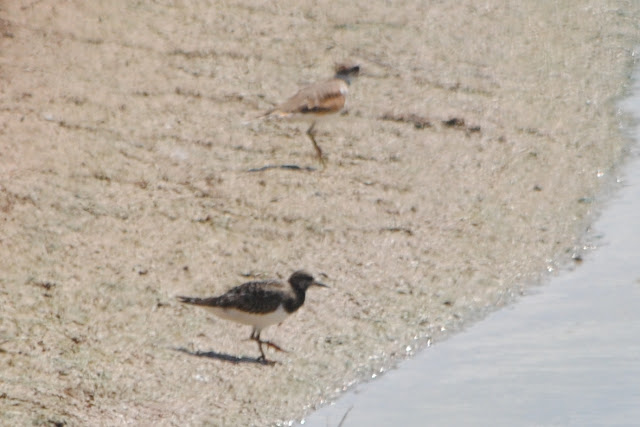 Now the Ruddy Turnstone use to be a sketch species for Arizona back in the day when they were quite regular, however, but in the last 10 to 20 years we have had very few records with only 6 in the state since the status change to a review species. As a matter of fact, there hadn't been any records of RUTU in Maricopa in over 20 year! 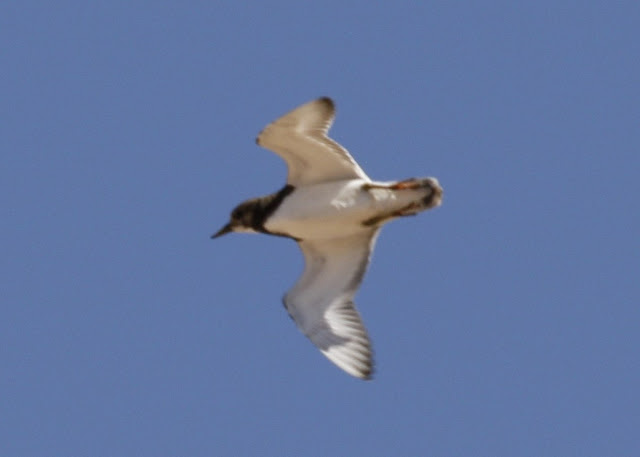 To add the the rare yet regular shorebirds I had been finding on these shorb runs, a few Sanderlings and a Snowy Plovers made things nice. 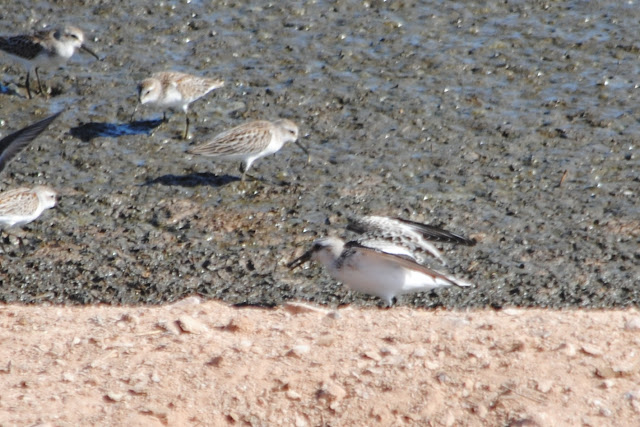 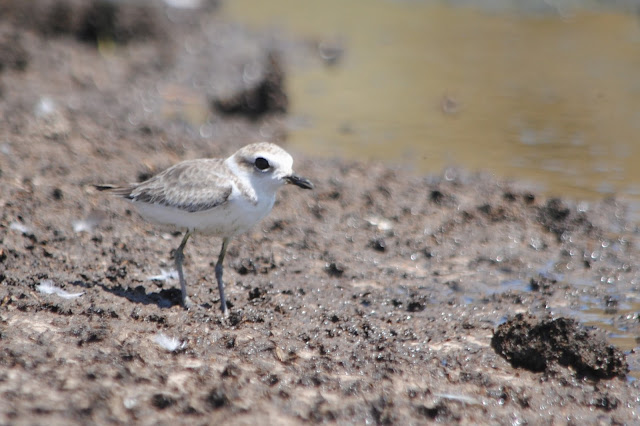 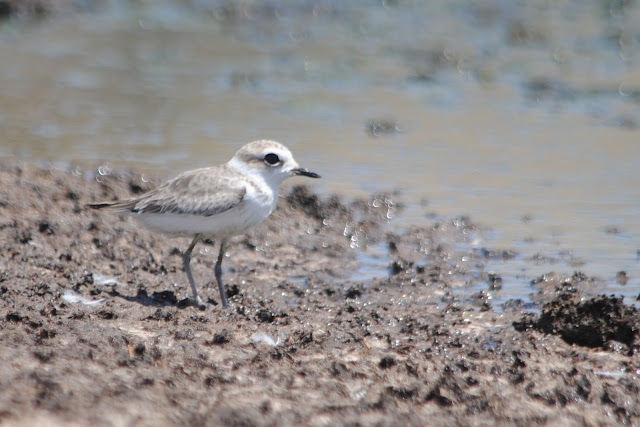 On a recent shorb run with Tommy D and Ms. Susan Fishburn we checked up on one of the ponds in the Gila Bend Area and found a juvenile Red Knot, the first for Maricopa County in seven years. 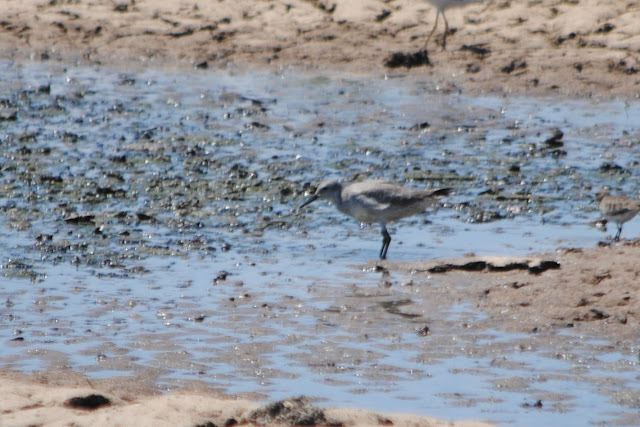 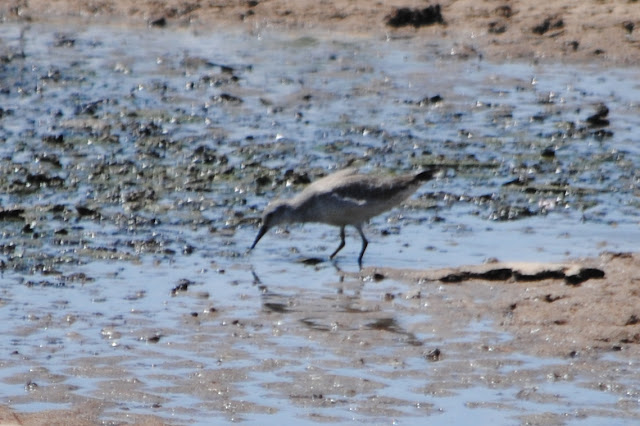 Although not a shorebird, a recent chase to see, a would be lifer Tricolored Heron provided me with not just great photos but great selfies ;) 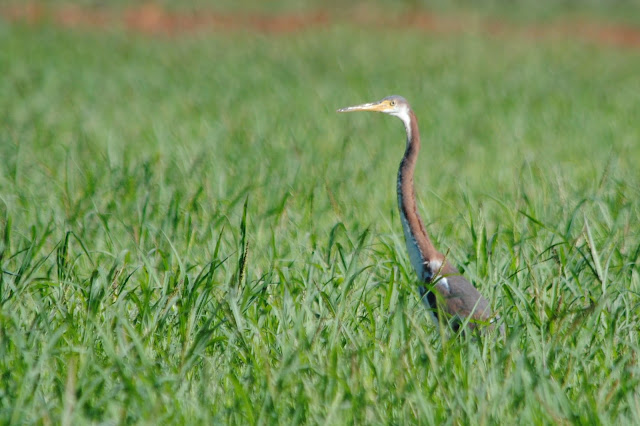 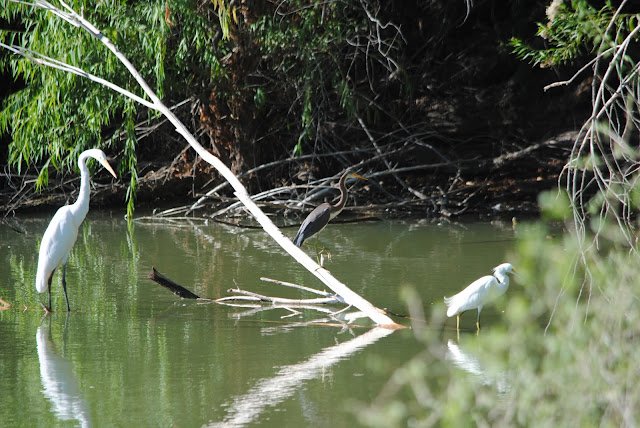 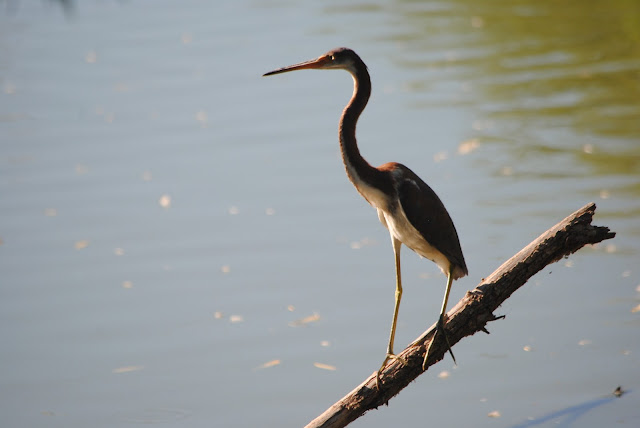 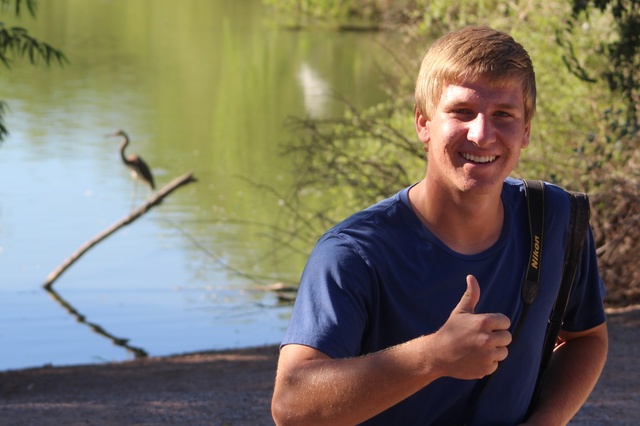 Now with the second week of September rolling in shorbs are gonna start slowing down before I know it. But before I'm done with "pond patrol" for the fall I still have two shorebirds in mind, Buff-breasted and Sharp-tailed Sandpipers! This year has been a great one for Buff-breasted Sandpipers and the northwest appears to be getting hit pretty hard by this species so it shouldn't be too long before one shows up in the southwest. Whether the fall of 2016 is the year for this species to make its way back into the state again or not, I do not know, but I shall certainly keep an eye out!

Birds I Have Photographed